It’s a nice, sunny day and all Max the Great Dane wants to do is jump into the pool and have a refreshing swim. But mom isn’t having it!

Sadly, his human isn’t approving swim time. Wanting to swim badly, this big guy starts whining ever so softly, but in no time it turns into some very loud whimpering. Just like a kid who’s being denied his favorite candy. 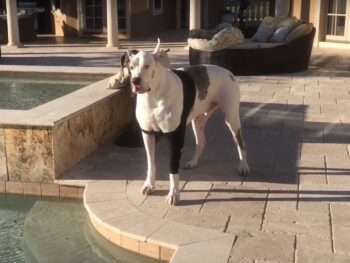 To top it off, Max is also deaf. It’s brilliant how he can lip read and understand hand gestures from his owner. He usually has no problems agreeing with his mom, but right now, he is just downright disappointed because he is not allowed into the pool!

He even walks to the edge of the pool and tries to dip just one paw into the water, as if to test the temperature (and his mom!). But he decides otherwise and continues his whining which has now become very persistent, showing how annoyed he is with his mom. 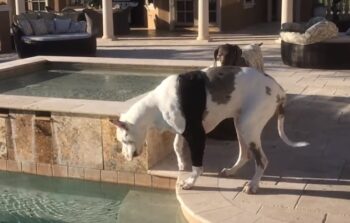 We do hope poor max got to swim eventually. Every dog deserves his fun!

To watch Max and his adorable reaction to a ‘no’ from his mom see the video below.

Couple adopts rescue dog before meeting him. When the door opens to reveal him they "lose it"