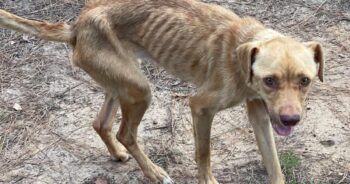 There’s nothing like a jarring before and after photo to indicate the importance of animal rescue. A recent post in the subreddit r/pics (simply: “a place for pictures and photographs”) went viral precisely for that reason.

Reddit user “h-h-c” shared photos of their dog Tilly, with two depicting her pre-rescue and one showing what she looks like now. Before Dawgs Fight Back Rescue saved her from her neglectful owners, Tilly was malnourished and bone-thin. She spent the first year of her life chained up outside.

“This is Tilly 4 months ago vs. today. She’ll be well-fed and taking it easy from now on.”

Rescuing Tilly From A Terrible Situation

Today, you could hardly recognize that skinny pup. With plenty to eat, the comfort of the indoors, and lots of love, Tilly transformed physically and emotionally.

It took work to get her to that point though. The OP credited Dawgs Fight Back for initially pulling Tilly from that abusive situation.

“The rescue convinced her owners to relinquish her and another dog in a similar state after they saw photos someone shared.”

Dawgs Fight Back looked after her health, giving her vaccinations, treating her for heartworm disease, and getting her spayed. Shortly after, Tilly was adopted.

Grateful for Tilly, “h-h-c” emphasized how hard Dawgs Fight Back worked to provide a better life for a starving dog.

“They did the hard work of removing her from that situation, getting her treatment, and helping her through recovery. They take a lot of rough cases. I’m just the lucky person who gets an awesome dog.”

In the care of good people, Tilly is thriving. She also has another doggie sibling now. When asked in the comments how Tilly has managed in her new home, “h-h-c” shared:

“We expected her to have a lot of food issues (aggression, tracking from our other dog, etc) which would be a totally normal response to her trauma, but that hasn’t been the case. She doesn’t even growl if our other dog steals her bone.”

Tilly’s new family actually takes care of her, and they’ve brought out her best self.

“Her zoomies are something to behold! You would never guess she looked like that a few months ago.”

Even without input from the original poster, a picture really is worth a thousand words. These before and after photos earned 49.6 thousand upvotes on Reddit.

Other users took to the comments to thank Tilly’s rescuers for changing her life.

“[Y]ou can tell by the ears how happy the dog is now. [C]ongratulations, you are a nice parent.” – u/pheelippo via Reddit

“Love that her fur is now a brighter, healthier color! Thanks for giving her the home she deserves.” – u/sailingisgreat via Reddit

It takes something like this to remind us there actually are some good things happening on social media.

“DogPhone” Allows Your Lonely Dog To Call While You’re Away

Meatloaf Rescues Puppy From Dumpster While On Tour